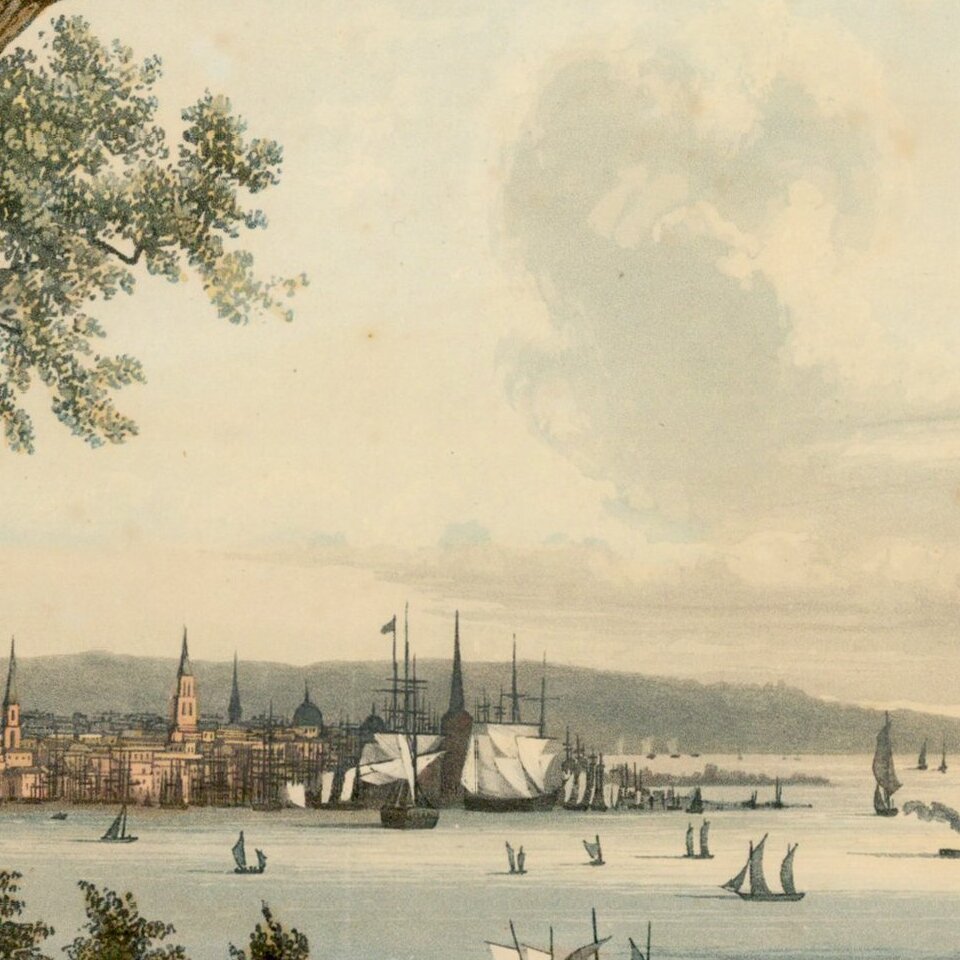 Rare first state of this finely executed aquatint view of New York City and Harbor as seen from Weehawken, New Jersey, based upon original artwork by Ambroise-Louis Garneray.

The present example bears the imprint of Basset, with later editions bearing the imprint of "a Paris chez Hocquart ainé succr. de Basset; New-York published by Bailly, Ward & Co." The view was apparently first issued in Paris as part of Garneray's very scarce and impressive color plate portfolio Vues des Côtes de France. There seems to be some confusion over the date of publication of the print, although Stokes (Iconography III, page 614) puts it at 183, based upon the appearance that the dome on the Merchants' Exchange is shown, completed in 1827 but destroyed by fire in December 1835. Further, there is no trace on the view of the tower of the Presbyterian Church on Wall Street, which was destroyed by fire in September 1834 but rebuilt in 1835.

Sigismund Himely created this acquatint for the publishing firm of Basset in Paris.

Ambroise Louis Ganeray (1783-1857) was a French painter and writer. Garneray was the son of French artist Jean-François Garneray (1755-1837), painter of the king. He joined the French Navy in 1796. He spent 8 years in English prisons after being captured in 1806. From 1814 onward, he pursued his career as a painter.

In 1833, he became a director of a museum in Rouen where he became one of the inventors of the acquatint process. The pictorial work of Garneray comprises 141 oil paintings, 176 engravings and 22 watercolor paintings. Part of his work was inspired by his adventurous life, such as the capture of Kent by Surcouf; others were made as peintre officiel de la Marine, in continuation of the works of Claude Joseph Vernet and Nicolas Ozanne. Most notably, he completed 64 views of French harbors and 40 views of foreign harbors, based upon his travels in the 1820s.