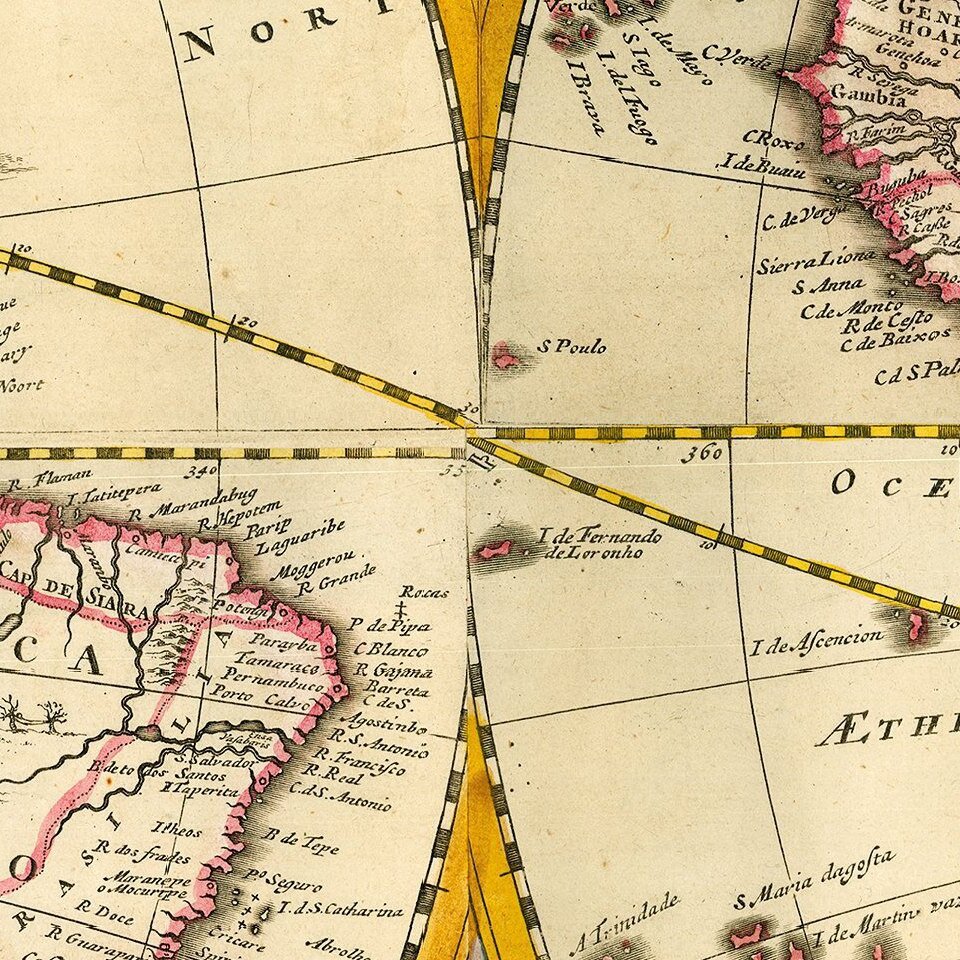 An Unrecorded Wall Map of the World from the Golden Age of Dutch Cartography. Finely preserved and previously unknown 4-sheet double hemisphere map of the World, intended to be displayed by a 17th Century Aristocrat. In the 17th Century, at the height of the Golden Age of Dutch Cartography, Dutch published wall maps became an important decorating statement for aristocrats and wealthy traders in Western Europe. Artists such as Jan Vermeer captured the importance of these wall maps as objects of art in a number of his most famous paintings, such as his The Art of Painting : vermeer0708.wordpress.com/the-art-of-painting/

Among the most important of the late 17th Century mapmakers was Frederick De Wit of Amsterdam. De Wit continued the tradition of remarkable wall maps by Willem Blaeu, Nicholas Visscher and others, including several wall maps of the world in 4, 8 and 12 sheets, many of which would be copied and re-issued by the great Italian mapmakers of the late 17th Century, including Stefano Scholar, Pietro Todeschi and Guiseppe Longhi.

Because of the size of these maps and use as objects of art, to be displayed prominently in the homes of the wealthy and ruling elite of Europe, very few examples of these maps have survived until modern times and when such maps survive, they are most typically in poor condition or heavily restored. In modern times, such 17th Century wall maps are highly coveted: www.finebooksmagazine.com/issue/201104/auction-1.phtml

The present map is an unrecorded variant of one of Frederick De Wit's multi-sheet masterpieces, published by Gerard Valk, one of the leading map publishers and engravers in Amsterdam at the end of the 17th Century. Known primarily for fine engraving and high artistic quality, Valk's work is among the finest from the latter part of the Golden Age of Dutch Cartography.

The map consists of a twin hemisphere world map, together with two polar projections. Surrounding the map are personifications of the four seasons (from upper left to lower right): spring, a dancing bear breasted Persephone is garlanded with spring flowers; summer, Ceres brings in the wheat harvest; autumn, Dionysis accompanied by satyrs and cherubs, collects the grape harvest, and adorn a herm with vines; winter, represented by strong man carrying a stick, Boreas the north wind can be seen blowing, whilst cherubs gut fish.

The map is based upon Frederick de Wit's terrestrial world map executed in about 1670-1680 (Shirley 451). This magnificent map must have been published between 1690 and 1700, as the imprint which appears on the pedestal of the garlanded herm in the lower left plainly gives the place as 'op d'Dam inde Wackeren hont.' Gerard Valck and his family moved into this house (where the Hondius family had previously lived) in about 1690. A latest possible date of approximately 1700 is provided by a variant of this map which includes the name of Leonardus, Gerard's son, and, although smaller, contains new details such as the supposed Mer Glaciale in northernmost America (Shirley 638). Both this later map, an earlier Valck world map (Shirley 531 & 532, giving incorrect date of c.1686).

Rodney Shirley opined that Valck's world maps were based on Jaillot's influential Mappe-Monde of 1674, but in fact all three bear a much closer relationship to De Wit's map. The present map shares many of De Wit's cartographic elements, particularly in the polar projections; but there are also numerous differences, some partly explained by this Valck map being on a larger scale than the original De Wit map, allowing greater detail and decoration. For instance, the gap between the words 'America' and 'Meridio' in Brazil are now decoratively filled with a native village and a battle scene; in other areas, such as the outline of the coast of New Zealand, the toponyms are engraved quite differently. The north-eastern coastline of Asia in the present work also bears a closer resemblance to the 1666 world map of Jan van Loon (Shirley 439).

The present example is a remarkable survival, especially in such magnificent condition. The condition is, without question, the finest we have ever seen for a multi-sheet wall map of the 17th Century.