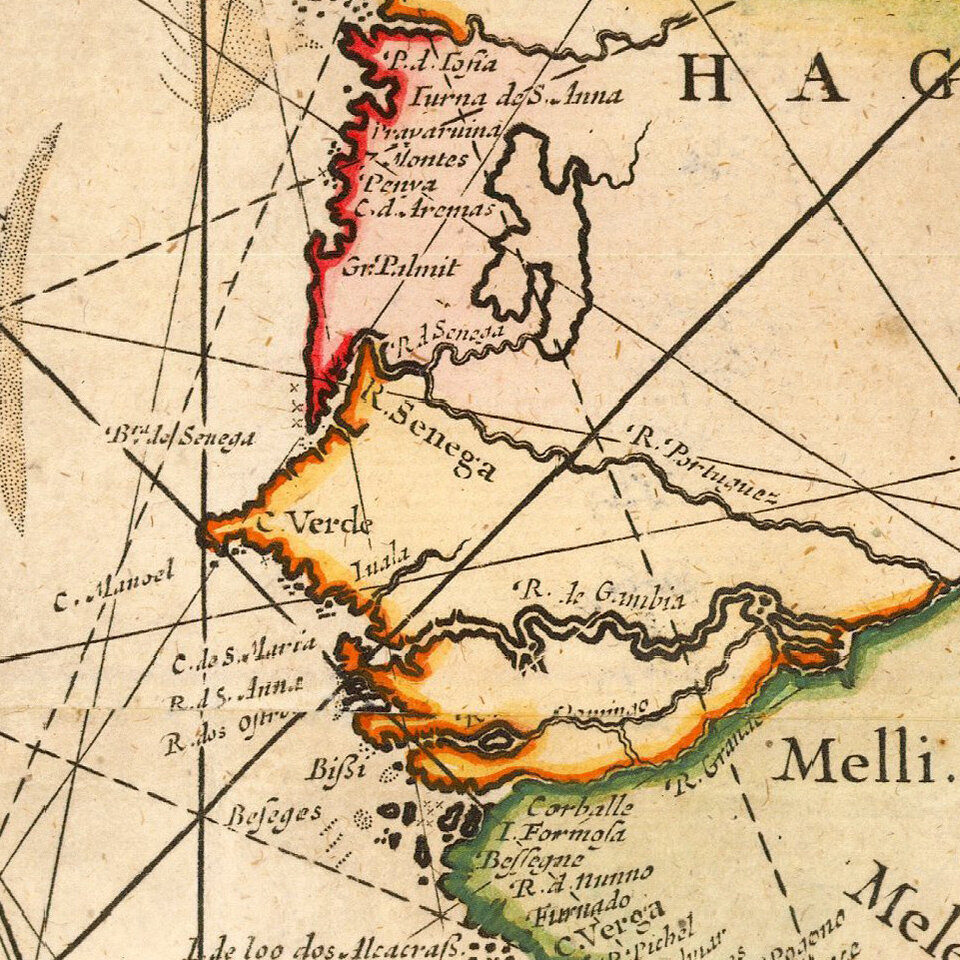 This chart was created for use at sea by Dutch mariners in the employ of the West India Company, at a time when the Dutch were intensely motivated to expand their trade footprints between West Africa and the Caribbean, Central and South America. The chart was constructed as a means of giving a general overview of the route between the coasts of America and Africa, which would have been supplemented by regional charts in Van Keulen's regional charts of the coastal waters of America and Africa.

The present chart is derived from Blaeu's monumental West India Paskaert, first issued in 1630. Blaeu's sea chart has been called a "scientific and artistic document of the first order, marking an important date in the history of nautical cartography and one of the most important contributions that the Lowlands produced in the XVII century" (Destombes & Gernez). Blaeu's chart was the first general chart of American waters that was actually useful for navigation.

In about 1674, toward the end of his career, Pieter Goos published a re-engraved version of Blaeu's West India Paskaert. This new chart is nearly identical to the Blaeu, but can be distinguished, in part, by the slight difference in the third word of the title (Goos using the words "waer in", Blaeu using "waerin").

There are two states of the Goos map, the second having been issued by Johannes Van Keulen. The Van Keulen edition is readily distinguishable based upon the inclusion of the navigational notes off the west coast of Africa and just above the equator, lettered A through G, with the words "Waage Weg" between. An explanation of this annotation is set forth below.

This second state was issued both as a wall map (approximately 39 x 32 inches) and, on rare occasion, as a series of 3 horizontal strips bound into Van Keulen's sea atlases, for use at sea.

The Earliest Practical Use of the Mercator Projection

The West Indische Paskaert "presents one of the earliest practical uses of the Mercator projection," (Schilder) if not the first overall as regarding printed charts. A review of printed charts of North America prior to Blaeu's chart reveals that it was indeed the earliest to be of practical use for navigation. Blaeu's first West Indische Paskaert of c. 1621 (Burden 194), did not utilize the Mercator Projection, significantly limiting its effectiveness as a practical navigational tool. Virtually all other charts were small works that appeared in the various editions of Medina's manual of navigation, and the similar Italian works of Camocio and Bertelli. The charts by Tatton and Claesz, while of fantastic decorative appeal, were likely largely ornamental.

"Blaeu produced his chart with the help of manuscript material of the area and supplementary material that was provided by [Dutch West India Company] pilots who had sailed these routes" ( History of Cartography, page 1425). Works such as Blaeu's chart provided the basis for the charting of the Americas underlying the Dutch sea atlases of the 17th century.

The significance of the Paskaert is elevated by the fact that it appeared at the critical time when Dutch colonial aspirations in the Western Hemisphere were at their highest. Manhattan and other parts of the Northeast had recently been settled when the chart appeared, but the Dutch were also casting acquisitive eyes on the Caribbean and South America.

These massive Paskaert's served as the Dutch West India Company's master chart for America, the Caribbean and coast of Africa, utilized as the primary sailing guide for Trans-Atlantic voyages for over 80 years.

The area shown as Waage Weg is intended to illustrate the best navigable route through the area known as the Doldrums, north of the Equator. The system was referred to as Karrepad or Wagenweg. The following explanation of the Waage Weg annotation was provided by Hans Kok.

The letters A through G derive from the Sailing instructions in use by the Dutch East Indian Company (VOC) and were used on most Dutch sea charts and sometimes also taken up by foreign charts. The marks were primarily used on an official basis after 1741 officially, but some earlier charts attempt to utilize this system of navigation near the equator. The system is called the Karrepad or Wagenweg in Dutch, translating into Waggonpath or Waggon trail The name originates from a horse-drawn waggon, where the wheels cut two parallel tracks in the road The idea was that all ships should transit the doldrum/equator area within these tracks in order to avoid long delays which might otherwise occur outside of the "Waage Weg". This area is now called the intertropical convergence zone. The Karrepad starts at 11° 30 North and runs to the equator, sometimes it starts at 12° 00 North. The area around the equator is heated most by the sun, causing hot air to rise up to the tropopause (c.40.000 feet), where it spreads out and comes down again around the tropics of Cancer and Capricorn. The descending air spreads out at the earth surface, pushing to the north and south. The air masses going towards the equator meet there, come to a standstill and rise again when heated up. As a result the colliding air masses cause large areas of calm winds, known as the doldrums. In this area the sailing ships may have no useful winds for weeks and will thus be subject to currents in the ocean that will transport them west (when west of the Karrepad) or east (when east of the Karrepad) as these are the prevailing currents there.

The chart is very rare on the market. This is the first example we have offered for sale.