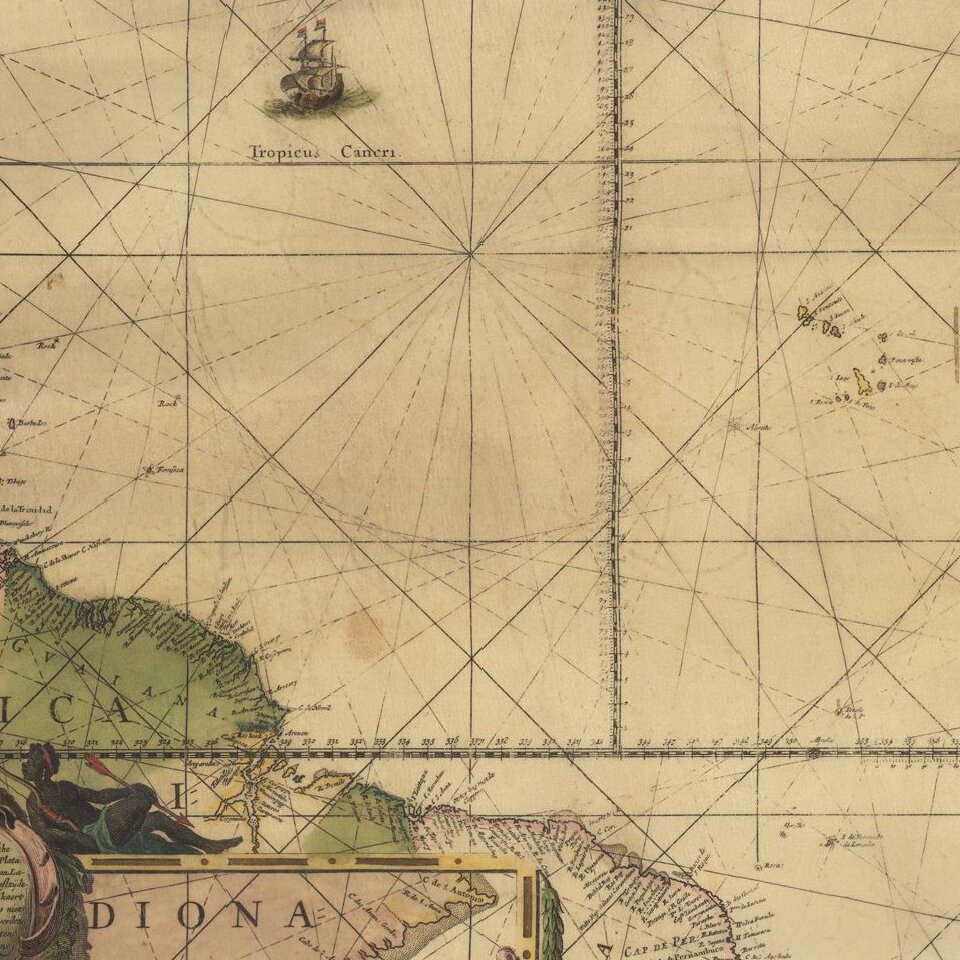 "A scientific and artistic document of the first order" -- One of the most important sea charts of the 17th century.

Blaeu's sea chart has been called a "scientific and artistic document of the first order, marking an important date in the history of nautical cartography and one of the most important contributions that the Lowlands produced in the XVII century" (Destombes & Gernez).

Burden says of it: "Willem Blaeu's West Indische Paskaert is of landmark importance, being the first sea chart relating to North America to use Gerard Mercator's projection". Blaeu's chart was the first general chart of American waters that was actually useful for navigation.

This impressive chart was, astonishingly, printed from a single plate, which would have been an inordinately large plate for the period. The fact that such an exceptional effort was made to create such a large plate is another indication of the importance attached to the work at the time. Clearly the intention was to print the chart on more durable vellum rather than paper, again supporting the notion that its primary use would have been for navigation aboard ship.

The Earliest Practical Use of the Mercator Projection

Blaeu's West Indische Paskaert "presents one of the earliest practical uses of the Mercator projection," (Schilder) if not the first overall as regarding printed charts. A review of printed charts of North America prior to Blaeu's chart reveals that it was indeed the earliest to be of practical use for navigation. Blaeu's first West Indische Paskaert of c. 1621 (Burden 194), did not utilize the Mercator Projection, significantly limiting its effectiveness as a practical navigational tool. Virtually all other charts were small works that appeared in the various editions of Medina's manual of navigation, and the similar Italian works of Camocio and Bertelli. The charts by Tatton and Claesz, while of fantastic decorative appeal, were likely largely ornamental.

"Blaeu produced his chart with the help of manuscript material of the area and supplementary material that was provided by [Dutch West India Company] pilots who had sailed these routes" (History of Cartography, page 1425). Works such as Blaeu's chart provided the basis for the charting of the Americas underlying the Dutch sea atlases of the 17th century.

Blaeu's Paskaert has an interesting geopolitical dimension. The regional place name, Nieu Nederland, is boldly spread across both what is today New York and much of New England, with no acknowledgement of English claims or even presence in the Northeast. To the north is only Nova Francia, while English territory is confined to the Mid-Atlantic region under the heading of Virginia. In fact, the crests of the four European colonial powers (Spain's is to the south) align very neatly on top of the other, as if there existed at the time a neat territorial division among the four powers along the North American seaboard. Even when the map was first published in the 1620s, this represented a hoped-for political reality of the aspiring Dutch colonialists. Within a decade the political geography expressed in this chart would be insupportable with the expansion of English towns throughout the lower Northeast. It was even more untenable in the 1690s, when the present chart was issued.

The significance of the Paskaert is elevated by the fact that it appeared at the critical time when Dutch colonial aspirations in the Western Hemisphere were at their highest. Manhattan and other parts of the Northeast had recently been settled when the chart appeared, but the Dutch were also casting acquisitive eyes on the Caribbean and South America. This expanding of colonial ambition is vividly expressed in the ways that Blaeu's Paskaert both enlarged the coverage of, and considerably updated the earlier version of his chart of circa 1621. As Stokes (page 82) observed, Blaeu sought "to make improvements in the delineation of the New Netherland coast" in this Paskaert. For the first time in a printed map, Manhattan takes on a triangular shape that would be followed by maps until the middle of the 16th century. Also the place name, Hellgate, appears on it for the first time on a printed map. The mapping of Long Island, Cape Cod, and Boston Harbor and Bay have all been improved, and for the first time, Blaeu here also attempted to fill in the gap on the first Paskaert between the New York area and the Chesapeake Bay, but did little more than just that; he reverted to an older cartography and omitted Delaware Bay altogether.

Bleau's Paskaert also considerably expanded the coverage of South America in relation to his earlier chart by including all of Brazil and part of Argentina as far as the Rio de la Plata. A large inset encompasses the remainder of South America. Approximately at the time of this Paskaert, the Dutch in 1630, forcibly occupied the Pernambuco region of Brazil in order to secure a share of Brazil's valuable sugar trade. Hence, the excellent mapping of the coast of Brazil found on this chart is indicative of the on-the-ground presence of the Dutch in the area.

The important inset of the southern portion of South America mentioned above highlights the celebrated discovery of the Le Maire Strait and Cape Horn, by the Dutch navigators Schouten and Le Maire, in 1616. This would provide the Dutch and others with an important gateway to the Pacific. This Paskaert also extends further to the west, thus including all of South and Central America and the Gulf of Mexico, once again reflecting a much more expansive Dutch outlook that developed in the time between the two charts.

The chart served for many decades as the Dutch West India Company's master chart for North America, the Caribbean, and South America, utilized as the primary sailing guide for Trans-Atlantic voyages for over 80 years. Destombes and Gernez suggest that the lack of a privilege on the first state indicates that it was used exclusively by the company and not available to the general public.

While the map is most closely associated with the WIC, it was also surely in use with the VOC as well. We have observed examples of the map with additional manuscript sea tracks showing vessels bound for the Cape of Good Hope and the East Indies. It stands to reason that the chart was also deployed on VOC vessels for the Atlantic leg of the journeys to and from the East Indies.

Perhaps most importantly, they could be repeatedly re-used for laying down tracks for each voyage. Unlike paper, a vellum sea chart could be wiped clean of the tracks of each voyage after its completion, insuring a clean template for the next expedition.

By contrast, paper sea charts in this era were typically bound into composite atlases and available for use by merchants, bankers and others working on land. When used at sea, they lacked the durability and re-usability of a vellum sea chart.

In modern times, these vellum sea charts have become particularly prized by collectors and institutions, as the vellum charts were the actual navigational tools employed at sea by the mariners of the 15th, 16th and 17th centuries, during the voyages of discovery, trade and warfare at sea.

History of the plate

The first state of this chart, which is undated, has been dated as early as 1621 (by Stokes) and as late as 1630 (by Schilder). Schilder points out that there is information on the chart sourced from Admiral L'Hermite's voyage to Tierra del Fuego from 1623 to 1626. Schilder also reports that in 1630 Blaeu published a pamphlet, of which there are no surviving copies, that explains the use of the chart. Of course, it does not necessarily follow that the chart was published the same year. Therefore, dating the chart between 1626 and 1630, as Burden does, seems appropriate.

The copper printing plate for Blaeu's chart was purchased by Jacob Robijn most probably at one of the sales of Blaeu stock in 1674. The Blaeu firm had suffered a devastating fire in 1672, and Joan Blaeu died in 1673. Robijn altered only the imprint in the upper left, leaving the geography unchanged (Schilder 63.3).

Robijn must have owned the plate only briefly, as Pieter Goos also reissued it sometime before his death in March, 1675 (S. 63.4). Goos introduced the imprint that carried over to the present chart: "Gedruckt / t' AMSTERDAM / bij / PIETER GOOS, / Op t'Water Inde Ver= / gulde Zee Spiegel." The Goos business was continued by his son Hendrick.

Sometime in the 1690s, probably in 1693 or thereafter, the plate came into the possession of Johannes Loots. Loots (1665 - 1726) was a publisher of sea charts who was active from the 1693 until his death in 1726. Loots began his career as an apprentice to Hendrick Doncker and later set up his own shop on Nieuwebrugsteeg, in Amsterdam, in 1693. Between 1695 and 1698, Loots, Claes de Vries (a surveyor-cartographer) and Antoni de Winter (an engraver), entered into a joint venture to produce 200 sea charts on a Mercator Projection ( Van Keulen Cartography, page 46). The plans were advertised in the Amsterdamsche Courant, in August and October 1698 and several charts offered separately.

The plate was also in part re-employed by Blaeu himself in an ingenious fashion. In his rush to complete a general atlas to compete with the Hondius firm in the early 1630's, Blaeu resorted to several expedients to quickly come up with enough maps to fill an atlas. To produce a map of the southeastern United States, Caribbean and Gulf region of North America, Blaeu used only the northwest portion of this chart. He masked the remaining parts of the plate to produce a map of folio proportions and then added a title to it, giving it the appearance of a standard folio map.

The chart also served as the prototype for a number of other, later sea charts, of the same region, published by other Amsterdam mapmakers such as Anthonie Jacobsz., Hendrik Doncker, Justus Danckerts, Hugo Allard, and Johannes van Keulen ( History of Cartography, page 1426).

This is one of two known examples of the Blaeu-Goos-Loots chart printed on vellum, the other being in the Biblioteka Narodowa, Warsaw.

This is the only known example on vellum in private hands.